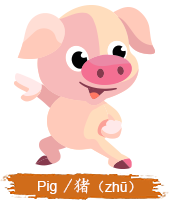 Pigs are diligent, compassionate, and generous. They have great concentration: once they set a goal, they will devote all their energy to achieving it. Though Pigs rarely seek help from others, they will not refuse to give others a hand. Pigs never suspect trickery, so they are easily fooled.

General speaking, Pigs are relatively calm when facing trouble. No matter how difficult the problems are Pigs encounter, they can handle things properly and carefully. They have a great sense of responsibility to finish what they are engaged in.

Occupying the last position in 12 Chinese Zodiac animals, Pig is mild and a lucky animal representing carefree fun, good fortune and wealth. Personality traits of the people born under the sign of the Pig are happy, easygoing, honest, trusting, educated, sincere and brave. The possible dark sides the Pig people are stubbornness, naive, over-reliant, self-indulgent, easy to anger and materialistic. They are sometimes regarded as being lazy. 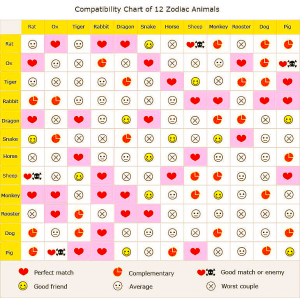 The pig, closely related to us is thought to be clumsy, lazy and smelly. While, scientific research shows that they are clever and pretty clean. There are wild boars living in mountain forests that are thought to be ferocious. It is said that when a group of boars walk together, the leader will erect his tail to show him as the leader. It is the same as the people born in the year of the Pig. If they are supervisors in an organization, they always remember to show themselves as the leader and sometimes may act arbitrarily.

Warm-hearted, honest and tolerant to others, the people under the Pig sign are always full of friends as they are faithful to them and set a high value on friendship. Whenever a friend is in need, they will help without hesitation. Also, they dislike quarreling and are magnanimous to let bygones be bygones. So, they usually can get along very well with others. Although thought to be materialists, they are not stingy and would like to share what they have with others.

In career, once meeting frustration, the Pig people is easy to lose confidence, care too much about other’s sneers, and thus look down on themselves. Therefore, try to calm down and communicate with colleagues are important at that time. On the other hand, they are diligent and always spare no effort to finish the duties. So, good luck often favors them. They are also patient in their jobs which make them good teachers.

Their shortcomings are too kind-hearted to easily believe in others, lack of responsibility, near-sighted and only paying attention to the present. Also, they are not good at money management.

People with Chinese zodiac Pig sign are considerate, responsible, independent and optimistic. They always show generousness and mercy to endure other people’s mistakes, which help them gain harmonious interpersonal relationships. However, sometimes they will behave lazy and lack actions. In addition, pure hearts would let them be cheated easily in daily life.

People whose zodiac sign is Pig are good-natured, resolute, steadfast and generous. They prefer the simple life and are more pragmatic in love relationship – would like the everlasting relationship rather than the temporary passion.